Nutella is the Greatest!

I love Nutella! I first had Nutella when I went to Italy when I was 10. We would sit at the hotel eating breakfast and they had this delicious, chocolatey spread in the bowl where they kept the jelly. I had no idea what it was at the time, but it quickly became out favorite. We would spread it on toast and eat as much of it as we could. Now, my daughter has Nutella almost every morning on crackers or a bagel. Sometimes I sneak some Chia Seeds on them just to add some nutrition.

Normal cheesecakes have a graham cracker crust. When I was thinking about making these cheesecake bars, I wanted to try something a little different, and chocolate bunny crackers were the answer! I've linked them here!

Pulverize them in the food processor just as you would regular graham crackers for the crust. I did not add sugar because the cookies have enough sugar in them already. Add melted butter to the food processor and continue processing it until it resembles wet sand. When that happens, pour it into the pan and evenly spread it throughout the bottom of the prepared pan. A trick to doing this is to take the bottom of a ¼ cup measuring cup and pat it down on the crust. This will get it into all the corners of the pan. Bake that for about 5-8 minutes and then let it cool.

You will want to use 2 bricks of cream cheese and make sure that they are at room temperature. If they aren't at room temperature and softened, the mixture will look curdled. It will still be fine, but you want to try to get the mixture as soft and as smooth as possible. Beating the cream cheese and the sugar for a few minutes before adding anything else will keep these cheesecake bars airy and light. Once you have beaten the cream cheese and the sugar together, add the egg and the vanilla. Continue to beat that until the mixture is completely combined. You may need to scrape down the bowl to ensure everything is incorporated. Once everything is combined, pour that on top of the crust.

These bars will need to bake for about 30-35 minutes. The bars should be puffy and lightly golden brown. They will still be a little bit jiggly when you take them out, but that's ok, there's some carry over cooking that will take place. Cool them for about an hour before you try to take them out of the pan. Lift them out of the pan with the overhung parchment paper. Cool them even further on a cooling rack. You can drizzle them with some more Nutella once they are cut and cooled. The more Nutella the better if you ask me! The bars can be eaten room temperature, but I think they are even better if you refrigerator them and serve them cold.

Check out some of my other recipes like my Apple and Walnut Crisp linked here or Peanut Butter Donuts linked here! 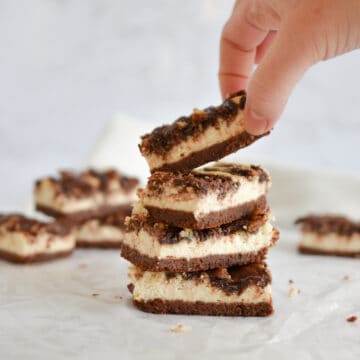 Nutella Swirl Cheesecake Bars are easy to make with only a few ingredients. Pop them in the fridge and enjoy them anytime you would like. They are delicious any time of year!
Print Recipe Pin Recipe
Prep Time 10 mins
Cook Time 30 mins
Course Dessert
Servings 12 pieces

Disclosure: As an Amazon Associate I earn small commission from qualifying purchases.