This apple and walnut crisp is a vegan and gluten free version of the classic dessert.

I'm a big fan of apple crisp. Anyone else? This apple and walnut crisp is a delicious variation of the traditional apple crisp. This one is gluten free and vegan. Instead of using traditional all purpose flour, I used King Arthur Gluten Free flour, but you could use whatever gluten free flour you have on hand.

Instead of using butter, I used coconut oil. Have you used coconut oil before? Surprisingly, when it is cooked, it does not taste at all like coconut. It helps keep the "crisp" part together without the dairy that would normally come from butter.

How to make this recipe

This recipe comes together in no time. I made four ramekins of apple crisp, but if you wanted to make this in a large baking pan, you could easily double this recipe. Each ramekin ended up holding one apple and it cooked down quite a bit, so if you are making this in a bigger pan, you might want to up the amount of apples because you will be able to spread them out more.

I used organic gala apples for this recipe. I love cooking and eating gala apples, so I always have them on hand. If you prefer a more tart apple or an apple that won't cook down as much, you might want to switch out the apple for a Granny Smith or a Cortland apple. Mix up the apples if you want! That would be a great idea too!

If you did not want to use the coconut oil, you could easily substitute that for butter. It wouldn't be vegan anymore, but it would still be delicious. I topped it with powdered sugar, but I came really close to adding some ice cream on top!

Want some other vegan recipes? Check out my Cherry and Almond Granola or my Roasted Cherry Tomato Soup. 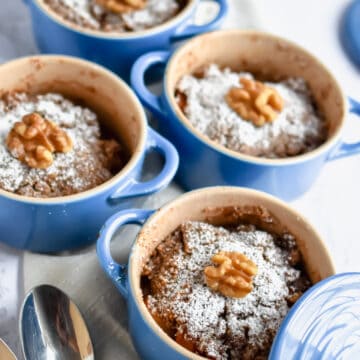