Disclosure: As an Amazon Associate I earn a small commission from qualifying purchases, however this is at no cost to you. Read my disclosure policy here.

I've been making cinnamon buns every Christmas morning for a few years now. They are a delicious, special occasion breakfast. With Valentine's Day just around the corner I thought I would try something a little different.

I've been loving red velvet cakes and cookies lately, so I thought I would give this a try. These buns became "red velvet" buns when I added cocoa and red food coloring. They aren't too sweet on their own, but add the delicious cream cheese icing and you have a real

Why You'll Love These Cinnamon Rolls

This dough contains yeast, so it will need to rise for a while before you can bake them. To start, add the milk, sugar, butter, salt, yeast, and food coloring to the bowl of a stand mixer. Mix that to combine everything. Add the eggs and the sour cream and mix again. Then you will add the flour and cocoa. Make sure you use good quality cocoa powder. I like to use Hershey's unsweetened cocoa powder, but you could use Ghiradelli, or whatever your favorite unsweetened cocoa powder is.

The stand mixer is now going to do all the kneading for you. Keep the mixer on medium high for about 4 minutes so it can thoroughly knead the dough. The dough should be smooth and all come together.

Once the dough is done in the stand mixer, lightly oil a larger bowl and place the dough in the oiled bowl. Cover that will plastic wrap and let it sit at room temperature for 1-2 hours until it is doubled in size. If your house is colder, it will need a little more time, closer to 2-3 hours. It's more important that the dough has doubled in size.

After the 2 hours is up, turn the dough onto a lightly floured counter and roll out the dough until it is about 18 inches by 12 inches. The dough will be very sticky, so don't be afraid to use flour when you need it.

The filling for these red velvet cinnamon buns are really simple to make. It is just brown sugar and cinnamon. You will need to melt butter and brush the butter onto the rolled out dough. Be generous here, you don't want to have any spots that aren't covered in butter on the dough.

When everything is covered in butter, sprinkle the cinnamon and sugar over all of the dough.

Once you have placed the cinnamon and sugar all over the dough, it's time to roll the dough into a large log. To do this, take the side of the dough that is closest to you and roll it up so you are rolling away from you. Try to get the dough as even in width as possible. Cut the dough into 12 even buns. The easiest way to do this is to cut the log in half. Then, place the two halves of the log right next to each other, and cut them down the middle evenly. You should now have four logs of dough (as shown below). Then do the same thing, put the four log next to each other and this time cut them into 3 pieces each, so you should end up with 12 buns.

Place the buns into a well greased 9x13inch pan and cover with plastic wrap for one hour until the are doubled in size. Bake at 375 degrees for 30 minutes.

How to Make the Icing

To make the icing, you will need room temperature butter and room temperature cream cheese. Put the cream cheese and butter into a bowl and beat them until they are combined. You can do this with a stand mixer or with a hand mixer, either will work. Then add the confectioners sugar, vanilla, and milk. Continue to beat that until it is the consistency you are looking for. If you would like it a little thinner, feel free to add more milk, and if you would like it thicker, add more sugar. Ice the buns when they are still warm so the icing melts into all the cracks of the cinnamon buns!

Can you make these cinnamon rolls ahead of time?

To make this the night before, once you slice the buns and place them in a greased pan, cover them and refrigerate them. In the morning when you are going to bake them, take them out about an hour before they are going to go into the oven so they can come to room temperature. Then bake them as you normally would.

What should we do with leftovers?

Leftovers should be kept in an airtight container in the refrigerator. To reheat, place a cinnamon bun on a microwave safe plate and microwave for 1 minute, or place the cinnamon bun in the toaster oven for 2 minutes to gently reheat.

Why didn't my cinnamon rolls rise?

Make sure your yeast is fresh and is not expired. Expired yeast won't rise properly. If your kitchen is cold, it might take longer for your cinnamon rolls to rise. Be patient! It's important your dough doubles in size so you have soft cinnamon rolls.

Other Recipes To Try

Did you love these Red Velvet Cinnamon Rolls? I'd so appreciate it if you would give this recipe a 5-star review! That will help other hungry readers find my recipes! 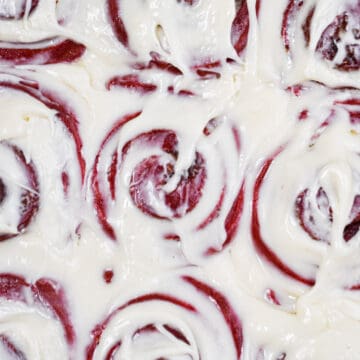