A perfect breakfast on St. Patrick's Day, these baked Lucky Charms donuts are a delicious sweet treats for kids and the kid in you! Want to know what the secret ingredient is to these donuts? It's cereal milk! With all that delicious flavor left in the milk, why not use it up?

What's Do You Need for These?

Donut Pan- Ever since I bought my donut pan, I have used it a ton! It's so fun and easy to make baked donuts in just 30 minutes. No need to break out the oil and the fryer and make a giant mess. Just put the dough into the pan, bake it up, and you're done!

Cereal Milk- Follow me here! That milk that is left in your cereal bowl has tons of flavor in it, so why not use it? It's really simple to make it, just add cereal to a measuring cup full of milk and let it sit. The cereal will get very mushy, so it's best not to eat it, unless you like mushy cereal! Strain the cereal and use the milk!

Almond Milk- There's no dairy in these donuts, so I used almond milk instead. If you want to use dairy, feel free! Whole milk or 2% milk would work perfectly in this recipe. You can even use Oat Milk if you wanted.

How Do We Make These?

Baked donuts are kind of like making muffins and most baked goods. You will want to mix the dry ingredients, and then mix the wet ingredients in a separate bowl, then mix everything together. Let's get started.

First, fill a liquid measuring cup with 1 ¼ cup of milk. This will yield about one cup of milk. Add one cup of Lucky Charms. Let that sit for about 10 minutes to get all the cereal flavor into the milk. Because the Lucky Charms have marshmallows, the milk will turn a light green color and that is totally normal. It will give the batter a little tint too and that is nothing to be concerned with. It will add even more flavor!

In the meantime, mix the dry ingredients in a bowl. Add the flour, sugar, baking powder, and salt to a bowl. Mix that together to combine everything and set it aside.

After ten minutes, strain out the cereal and keep the milk. Discard the cereal as it will be very mushy. Into the bowl with the milk, add the egg, coconut oil, and vanilla. Mix everything together to combine.

Add the wet ingredients to the dry ingredients and mix until everything is just combined. Do not overmix as that will turn the donuts very tough. Preheat the oven to 400 degrees. Spray the donut tins and add the batter to the donut tins.

Adding the donut batter to the pan can be a little tricky. I find the easiest way to do it is to add the batter to a piping bag fitted with a large tip but if you don't have a piping bag I have another neat trick for you.

Grab a gallon Ziploc bag and put the batter into the Ziploc bag. When all the batter is in the bag, cut one corner of the bag about a half inch from the corner. That will give you a big enough hole for the batter to flow through easily and into the baking tins.

Bake these donuts for 25-30 minutes. When you insert a toothpick into the donut it should come out clean. Take the donuts out of the tin and place them on a cooling rack to cool while you make the glaze.

I find that making a glaze for donuts is really easy. I take one cup of powdered sugar, add one tablespoon of almond milk and one teaspoon of vanilla. Mix that until it makes the consistency that you are happy with. If it is too thick, add a little more milk. If it is too thin, add a little more powdered sugar. The consistency should be thick enough to stick to the donuts, but not too thin that it runs off.

Dip the donuts into the glaze and place them back on the cooling rack. If you do not feel comfortable placing the whole donut into the bowl with the glaze, you can use a knife and spread the glaze on the donut. Top with Lucky Charms marshmallows to decorate. Serve as soon as the icing dries.

Questions about this Recipe

Can I make this recipe Gluten Free?

Lucky Charms are now being made as gluten free, so that's a great start! I would use your favorite gluten free flour to make these and add a little more almond milk to loosen up the batter.

Can I use other types of cereal?

Definitely! I think Cinnamon Toast Crunch would be an amazing idea for donuts. Fruit Loops could be really fun as well. You would use the same recipes, just substitute whatever cereal you are using for the Lucky Charms.

Can I use regular milk instead of almond milk?

Yes! You can substitute regular milk or even oat milk where ever almond milk is used. It won't effect the flavor or texture of these donuts.

Can I do a different glaze for the donuts?

Sure! You can use the cereal milk to flavor the glaze too if you wanted. That would make these even more full of cereal flavor! A chocolate ganache would work well too, but I think the chocolate might overpower the cereal flavor. Add any other type of extract you would like. Almond extract might work well instead of vanilla too.

Other Recipes to Try!

Did you give this recipe a try? I’d love to hear from you! Give me a shout on Instagram or Facebook and let me know (@Lynnswayoflife) ! 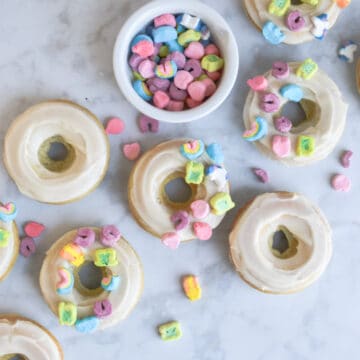 A perfect breakfast on St. Patrick's Day, these baked Lucky Charms donuts are a delicious sweet treats for kids and the kid in you! Want to know what the secret ingredient is to these donuts? It's cereal milk! With all the flavor left in the milk, why not use it?
Print Recipe Pin Recipe
Prep Time 10 mins
Cook Time 30 mins
Course Breakfast
Servings 12 Donuts