These Sprinkle Filled Whoopie Pies are a fun addition to any party! Add any type of sprinkle to make them festive for any occasion! The rich, chocolatey cake and the delicious, creamy buttercream filling make these treats a delicious special occasion dessert!

What the Heck is a Whoopie Pie?

How do we make them??

In a nutshell, the chocolate part of these whoopie pies is a mini chocolate cake. These whoopies pies are almost brownie like, which makes them even more delicious!

To make them, start by creaming the butter and sugar together in a stand mixer fitted with the paddle attachment. You could use a hand mixer if you don't have a stand mixer, that would work perfectly as well. Beat the butter and sugar together for about two minutes until they are fluffy. Next, add the eggs and the cooled coffee. Continue to beat that until everything is mixed together.

In a separate bowl, mix the flour, unsweetened cocoa powder, baking powder, baking soda, and salt. Mix that all until combined. By mixing it before you add it to the butter and sugar mixture you will avoid any "zebra stripes" throughout the mixture. You know, when there are white and chocolate stripes because things aren't mixed well, we definitely want to avoid that.

Add the dry mixture to the butter and sugar mixture. Mix everything together until it is well combined. Then add the milk to loosen the mixture up. When everything is combined and a thick batter is formed, we are ready to bake them!

Prepare two baking sheets with either parchment paper or silicone baking mats like these. Scoop the batter onto the baking sheet and leave about an inch and a half between each pie. I would suggest using an ice cream scoop to make them all uniform in size since we will be sandwiching them together. Depending on how big you would like your pies, you can either make them mini or large whoopie pies by adding more or less batter to the baking sheet. These whoopie pies are super rich and chocolatey, so smaller might be better in order to enjoy more of them!

Bake them for 15 minutes and allow them to cool for a few minutes before putting them on a wire rack to cool completely. Next, we make the buttercream!

Let me know if you make this recipe! I'd love to hear from you! Check out these other delicious recipes like these Red Velvet Cinnamon Buns or these Nutella Swirl Cheesecake Bars. Oh yea, these Peanut Butter Donuts are insane!!

Disclosure: As an Amazon Associate I earn small commission from qualifying purchases. 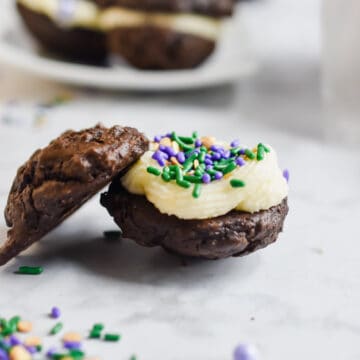 To make the buttercream

Putting the Whoopie Pies together

Tried this recipe?Let us know how it was!
« Red Velvet Cinnamon Rolls
Apple Cinnamon Breakfast Bars »