Ready in 15 minutes, Sourdough Apple Cider Donuts scream Fall! They are full of cinnamon, brown sugar, and fresh apple cider! These donuts will transport you to the apple orchard without leaving your home!

I've made these a little more healthy, since they are baked and not fried.

Baked donuts have become and obsession in my house. They are easy to make and my kids love them! Check out these peanut butter donuts, Baked Sourdough Donuts, or even Lucky Charms donuts!

Why These Donuts Are Amazing

Sourdough discard is the extra sourdough starter that you have leftover when you feed your starter. If you're new to sourdough and need some information on how to keep it happy, check out my post on how to feed a sourdough starter. My starter is 100% hydration, meaning I've always fed it equal parts flour and water. If you have a starter that has a lower hydration, meaning you feed it more flour than water, add more apple cider to this recipe.

The discard is also "inactive or unfed" meaning I took it right out of the refrigerator and added it to this recipe. It has not been fed any new flour and it's not active and bubbly.

If you don't have sourdough discard, you can substitute buttermilk or sour cream instead.

Do They Taste Sourdough?

They don't! Because they don't have the traditional long fermentation process like a loaf of sourdough bread, they don't taste like sourdough. The sourdough starter adds moisture and texture to these donuts.

Can these donuts be frozen?

Yes! To freeze them, allow them to cool completely and do not coat them in the cinnamon and sugar mixture. Place them in a Ziploc bag or an air tight container and freeze them. To defrost, place them on the counter to thaw. Then coat them in cinnamon sugar when you are ready to serve.

How long will they last?

If you do not coat them in cinnamon sugar, they will last for up to 4 days. Once they are coated in the cinnamon sugar mixture, they really should be eaten immediately, or within 24 hours. That's because the sugar begins to melt and makes the donuts sticky.

I don't have a donut pan, can I still make these?

Yes! If you don't have a donut pan, you can use a muffin tin instead. You can either eat them straight out of the muffin tin, or you can cut a hole in the middle with a cookie cutter or a small knife.

Did you love these Sourdough Apple Cider Donuts? I'd so appreciate it if you would give this recipe a 5 star review! That will help other hungry readers find my recipes! 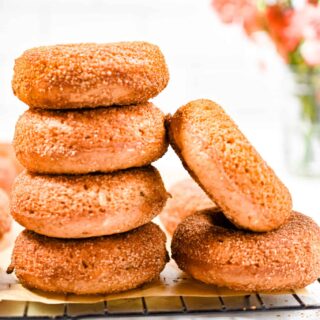 For the Cinnamon Sugar Coating

To make the cinnamon sugar coating