Full of vanilla soaked cranberries and raisins, these Cinnamon Hot Cross Buns are a perfect addition to any brunch table. Serve them warm for the most delicious flavor and texture.

Hot cross buns are a perfect treat to serve on any Spring day. They would be perfect on a buffet table with this Strawberry Crunch Cake and this Instant Pot Carrot Cake!

What's in these Buns?

Hot Cross Buns are traditionally served around Good Friday and originated in England. They are full of spices and dried fruit, in this case raisins. According to this website, the hot cross bun goes back as far as the 12th century and cross symbolizes Jesus, and that is why they are traditionally served on Good Friday. Now, people eat them throughout the Lenten season and beyond.

Dried Fruit- For this recipe, we are using raisins and dried cranberries. You could use currants as well if that is what you prefer. It's important to just make sure you have some sort of dried fruit. To plump of these dried fruit, we are adding vanilla to them to add even more flavor.

Instant Yeast- To be honest, I tried making this with sourdough starter and it just did not work. Instant yeast is reliable and as long as the milk is not too hot when you are activating it, works perfectly. Another important tip, make sure that the yeast and the salt are not touching when you combine it together. If you put the salt directly on top of the yeast, the salt will kill it. So mix the yeast with the milk first, and then sprinkle the salt over the mixture.

Cinnamon- The spices are really what make these buns so special. Pumpkin pie spice works perfectly here because it already has lot of amazing spices in it, like cinnamon and nutmeg. To up the cinnamon flavor, I added even more cinnamon to the buns. In my opinion, you can't go wrong with cinnamon!

Apricot Jam- The apricot jams makes these fluffy buns have a sweet and delicious crust on top. Make sure to add the apricot jam glaze as soon as they come out of the oven so the jam melts nicely and gets in all the cracks and crevices.

First, we need to plump up the dried fruit. In a small bowl, add the raisins and dried cranberries and top with one tablespoon of vanilla. Add enough warm water to just cover the fruit. Let that sit for a few minutes while we make the rest of the dough.

You will need a stand mixer for this recipe. If you don't have one, you could do this by hand, but it will be quite a workout. The stand mixer does all the hard work for you.

Add the warmed milk (just warmed to room temperature), yeast, and one tablespoon of sugar to the bowl of the stand mixer. Let that sit for about five minutes until it gets frothy. The sugar is feeding the yeast and waking it up.

Once the yeast is frothy, add the rest of the sugar, eggs, and melted butter. Mix that to combine the ingredients. Add the flour, salt, pumpkin pie spice, and cinnamon. Turn the mixer onto low and gently combine that.

Strain the raisins and dried cranberries and discard the liquid. Add them to the mixing bowl and knead the dough for five minutes. You'll want to do this by turning the mixer on medium. The dough will be sticky but it should come together as a large dough ball when it s done. Cover the bowl with plastic wrap and let it sit at room temperature for 1.5-2 hours, until it has at least doubled in size.

This is the one I have and I absolutely adore it. The dough balls should barely touch. Once all the balls are in the pan, cover it with plastic wrap again and let it sit at room temperature for one hour. At this point, once the dough has risen the balls will be touching and that is what you are looking for.

Making the Paste for the Crosses

If you want to make these more fancy, you can add a ridged piping tip. If you don't have a piping bag, simply add the paste to a gallon Ziploc Bag. Cut off one corner of the bag and push the paste to that side so it will come out the side you have cut. Set the paste aside while we shape the buns.

Now that the buns have risen in the pan, it's time to pipe the crosses. With your piping bag or Ziploc bag, pipe one long row across the four buns. Do that for all three rows. Then pipe a shorter line across the three buns. Do that four times. You will now have the traditional cross for the top of the buns.

Crack one egg and discard the yolk. Add one tablespoon of water and mix that around. With a pastry brush, paint the egg white mixture over the buns, being careful not to disturb the crosses you just piped.

Place in a 375 degree preheated oven for 35-45 minutes. You will know the buns are done when they are golden brown or when the inside of them measures 185 degrees with in internal thermometer.

Can I make these ahead of time?

If you wanted to make these ahead of time, I would suggest making them as the recipe stated up until you pipe the crosses. Once you pipe the crosses, put them in the refrigerator, covered with plastic wrap. In the morning, bake them off and then glaze them. They really do not freeze well and they are best immediately out of the oven.

Can I use other types of fruit?

Sure! Currants are traditional, but you could used pieces of dried apricots or just raisins if you did not have any dried cranberries on hand.

Can I make these without a stand mixer?

Definitely! Like I mentioned above, you'll definitely get your workout in! You'll need to knead the dough for about 10 minutes to get the same kneading as the stand mixer. It's definitely possible, but the stand mixer just makes it much easier.

Other Recipes to Try

Did you love these Cinnamon Hot Cross Buns? I’d love to hear from you! Give me a shout on Instagram or Facebook and let me know (@Lynnswayoflife) ! 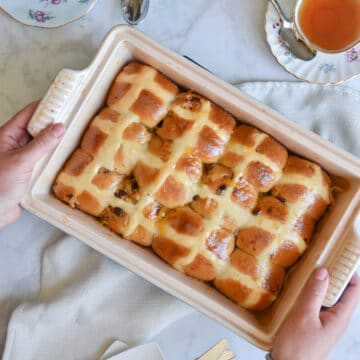 To Make the Paste for the Crosses

To Make the Apricot Glaze

To Make the Buns

To Make the Paste for the Crosses

To Make the Glaze