Sausage, mushrooms, and herbs bring this sourdough stuffing to life! A twist on the classic stuffing at everyone's Thanksgiving dinner, this stuffing is filling and full of sausage and mushrooms as well as herbs like sage and rosemary!

Disclosure: As an Amazon Associate I earn a small commission from qualifying purchases, however this is at no cost to you.

This sourdough stuffing has all the classic flavors of a Thanksgiving stuffing, like rosemary and sage, but has the addition of sausage and mushrooms to take this stuffing to the next level!

Dressing is a little different than your typical stuffing, that's because we aren't stuffing it in the turkey, you're baking it in a baking dish instead. That's really the only difference. You can stuff this into the cavity of the turkey, but I don't recommend it.

If you do, you'll likely end up with an overcooked turkey. That's because the turkey will cook faster than the stuffing. The stuffing will take a long time to cook in the cavity of the turkey, and it won't get those crisp edges we all love!

Most of these ingredients are things that you would use for your typical Thanksgiving stuffing.

Can I Use Another Type of Bread?

Yes! Stick with a chewy, more dense type of bread. Classic sliced white bread would fall apart in the stuffing. Any artisan bread loaf will work in this recipe.

I find that homemade sourdough bread doesn't really go stale, it tends to just go bad. When you are making this recipe, if you aren't using sourdough bread, you can make you bread go stale by leaving it on the counter until it gets hard. Toasting the bread gets the "stale" texture quicker.

Preheat the oven to 350 degrees. Grease a 9x13 inch baking dish with butter. Cut or tear the sourdough bread into cubes and place the bread on a baking sheet. Bake the baking sheet for 10-15 minutes until the bread is "stale" or hardened.

Take the sausage out of the casing and place it in a saute pan with the butter. Cook until the sausage is no longer pink, about 5 minutes. Add the chopped onion, chopped celery, and sliced mushrooms. Cook for another 5 minutes until the vegetables are soft and translucent. Add the chopped herbs and mix everything until just combined.

When the bread is hard and a little toasted, add the bread to a large bowl. Add the sausage and mushroom mixture to the bowl. Mix well to combine the ingredients. In a liquid measuring cup, mix together the three cups of broth with two eggs. Pour the liquid into the bowl with the bread and mix again.

Add the mixture to the prepared baking dish and bake, covered with aluminum foil for 45 minutes. After 45 minutes, remove the aluminum foil and bake for 15 more minutes until the stuffing is browned to your liking. Serve immediately!

Variations Of This Recipe

Can I make this stuffing ahead of time?

How long will this stuffing last?

Can I used dried herbs instead of fresh?

Did you love this Sourdough Stuffing with Sausage and Mushrooms? I'd so appreciate it if you would give this recipe a 5 star review! That will help other hungry readers find my recipes! 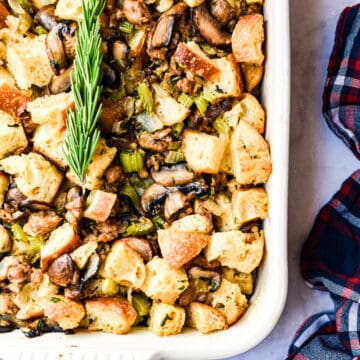 Sourdough Stuffing with Mushrooms and Sausage