This hearty and comforting Zuppa Toscana is made entirely in the Instant Pot! It is full of sausage, potatoes, carrots, and spinach. This soup is so easy to make and will warm you on the coldest of nights! And the best part, it's ready in under an hour!

Disclosure: As an Amazon Associate I earn a small commission from qualifying purchases, however this is at no cost to you.

This recipe is a play off the Olive Garden Zuppa Toscana. I like eating out just as much as the next person, but there is so much extra salt and fat in most of the dishes you get at restaurants.

Try making it at home! You are able to control the quality of the ingredients, how much you make, how much you eat, and the amount of salt and fat in the recipe. It's a win win when you make it at home. Plus it saves you SO much money!

What is Zuppa Toscana?

"Zuppa Toscana" translates in Italian to "Tuscan Soup". This is a very broad term and is more the type of soup, not the specific recipe. As with all soups and recipes, it has changed over time and as more people have made it!

It traditionally has all the flavors of Tuscany, like white beans, sausage, and kale. This soup became really popular when the Olive Garden created a soup and added it to it's menu.

This soup is a little different since I've used spinach instead of kale. My family prefers spinach, but if you prefer the heartiness of kale, feel free to use that.

This soup has a lot of veggies in it. All those veggies offset the sausage and cream in the soup, right? Well, at least that's what I tell myself!

Can I use frozen spinach instead of fresh?

Yes! Use frozen whole spinach. Defrost the spinach and add it to the soup at the end of cooking and allow the spinach to heat by setting the Instant Pot to "saute" for 2 minutes.

Kind of! To make this soup ahead of time, make the soup and cook it through. Once it is done cooking and you have released the pressure, allow the soup to cool. Do not add the spinach or cream. Freeze the soup in a Ziploc bag or an airtight container for up to 4 months. When you are ready, heat up the soup on the stove and add the spinach and cream right before you are going to serve it.

This soup is naturally gluten free, since we aren't using any type of flour. To make this soup keto friendly, leave out the carrots and substitute cauliflower for the potatoes.

Did you love this Instant Pot Zuppa Toscana? I'd so appreciate it if you would give this recipe a 5 star review! That will help other hungry readers find my recipes! 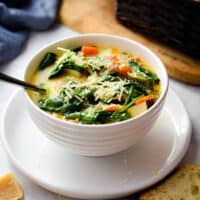 This hearty and comforting Zuppa Toscana is made entirely in the Instant Pot! It is full of sausage, potatoes, carrots, and spinach. This soup is so easy to make and will warm you on the coldest of nights!
Print Pin Rate
Course: Soup
Cuisine: Italian
Keyword: Zuppa Toscana Instant Pot
Prep Time: 5 minutes
Cook Time: 25 minutes
Servings: 6 Servings
Calories: 463kcal
Author: Lynn Polito