An easy weeknight meal, this cozy Instant Pot Ham and Potato Soup is ready in under 45 minutes. When you don't want to stand over the stove for hours, but want that homecooked taste, break out your Instant Pot!

My 4 year old has been loving grilled cheese with ham sandwiches for lunch when she goes to preschool. When I find something that she loves, I make it all the time! Whatever I can do to get her to eat.

Aldi had a ham on sale, so I bought it and cooked it. But what I forgot, or didn't realize, is there's a lot of meat on a ham. There's only so much a little preschool girl can eat, not to mention she only has lunch at school two days a week.

So I needed to figure out other ways to use that ham, and what better way than in a soup! When I made this for my family, it was a hit!

My daughter called it "ham chowder", and she's not wrong! It's a little like a chowder, except not as thick. It's loaded with potatoes, carrots, ham, and cheddar cheese. Let's get down to the details!

Here in New England soup season is in full effect! Whenever I can, I make a soup. There's nothing more comforting that dipping a sourdough dinner roll in some soup! This winter, give these other soup recipes a try as well.

What Type of Ham To Use

In this recipe, you'll want to use the meat of a ham that you cooked for Sunday dinner, for example. A spiral ham or a honey glazed ham is just what you need for this recipe. If the ham is glazed, simply remove the outside portion of the ham and only use the meat.

Do not use cold cut ham, as that would fall apart in the soup and disappear. You want chunks of ham throughout the soup.

If you don't want to cook a giant ham for just this soup, you can purchase small ham steaks in the grocery store. They are usually by the bacon. One of those ham steaks would be enough for this soup.

Golden potatoes are my potatoes of choice for this soup. 3-4 of them is all you need. Depending on the size, you want to get 2 cups diced. Russets, red potatoes, or Fingerlings potatoes are also great options if you don't have Yukon Gold on hand.

To peel or not to peel? That is the questions! I don't usually peel my potatoes. There's a lot of added nutrition in the skin, so I like to keep the skin on. If you don't like the skin or would like to take the time to peel the potatoes, go for it!

First, let's get the cleaning and chopping out of the way. Peel and cut your onion and carrots. Then cut your ham and potatoes into small diced pieces. Set that all aside.

Once the vegetables are softened, add the ham, potatoes, and flour to the Instant Pot. Stir for 1 minute to combine all the ingredients. Add the chicken broth and heavy cream and stir again. Close the Instant Pot lid and cancel "sauté" mode. Turn the Instant Pot of "high" for 10 minutes. Then allow it to naturally release for 15 minutes.

Once it is done naturally releasing, open the lid and add the cheese. Stir everything to combine and season with salt and pepper. Serve immediately.

Because of the dairy in the soup, it will not freeze well. The cream would separate in the freezer and give the soup a not pleasant consistency. Potatoes also do not freeze well. I would make this soup and plan to eat it over one or two meals.

How long will this soup last?

This Instant Pot ham and potato soup will last 3-4 days in an air tight container in the refrigerator. To reheat, place the soup in a sauce pan and gently reheat it. You can also place it in a microwave safe bowl and microwave it for 90 seconds to two minutes.

I don't want to use heavy cream, what else can I use?

Whole milk, evaporated milk, or half and half can all be substituted for heavy cream.

Did you love this Instant Pot Ham and Potato Soup? I'd so appreciate it if you would give this recipe a 5 star review! That will help other hungry readers find my recipes! 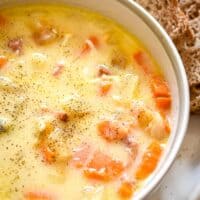