Don't throw out that extra sourdough discard! ½ cup and 15 minutes will get you the most delicious and easy baked sourdough donuts! Top them with chocolate icing, roll them in powdered sugar, or cover them is spiced cinnamon sugar for an extra special treat!

I don't know about you, but I am constantly trying to find things to add my sourdough starter to. I have such a hard time throwing it out, since it produces the most delicious bread. The starter has so much potential and adds great texture and moistness to these donuts.

To be honest, I can live without the typical fried donut. The texture and taste is off putting to me. Am I the only one?? These are much more pleasant and flavorful, plus I control the ingredients.

Why You Should Make These Donuts

I've become obsessed with making donuts! Peanut Butter baked donuts or Lucky Charms baked donuts are some of my other favorites.

When you have a sourdough starter, you need to "feed" it before you bake with it. In doing this, you will get rid of a portion of your starter in order to feed the rest and get it bubbly and active to bake with. The portion that you are getting rid of is called the "discard". It's perfectly fine to add to baked goods, but it's not great to make a loaf of sourdough bread with as it doesn't contain the active bacteria to make the dough rise. Keep the extra sourdough discard in a container in your refrigerator to use in all sorts of baking. You can keep extra discard in a mason jar in your refrigerator for a few months. It will stay good just hanging out in the refrigerator.

These sourdough waffles are too good and a must try if you have any extra discard and want to make an extra special breakfast treat.

How To Make Baked Sourdough Donuts From Scratch

How to Make the Toppings for the Donuts

They don't! Because these donuts don't have a long ferment like a loaf of sourdough bread would, they don't taste like sourdough at all. The sourdough discard adds tenderness to the donuts, but not to the taste.

I don't have Sourdough Discard, can I still make this recipe?

Sure! Sour Cream or Greek yogurt would be a great substitute for sourdough discard.

Can I make these dairy free?

If you don't have whole milk or are dairy free, any milk would work. Almond milk, soy milk, coconut milk would all be great substitutes. If you aren't worried about dairy but only have 2% milk on hand, use that too!

How long will these last?

Can I freeze these donuts?

Yes! They are great to freeze for up to 3 months in an airtight Ziploc bag. When you are ready serve them, add the toppings. Don't add the toppings before freezing them as the powdered sugar or the cinnamon sugar will get very wet and almost melt off the donut when you defrost them.

Can I fill these donuts?

If you want to fill these donuts, I would pipe the dough into muffin tins. Bake as you would and then fill them with jelly when they are fully baked. Even if you don't want to fill them, a muffin tin would be a great substitute for the donut pans.

Did you give these Baked Sourdough Donuts a try? I’d love to hear from you! Give me a shout on Instagram or Facebook  and share this recipe on Pinterest! And don't forget to check out some other drool worthy recipes below! Thanks for sharing this journey with me and enjoy these delicious recipes!

Give These Sourdough Recipes A Try! 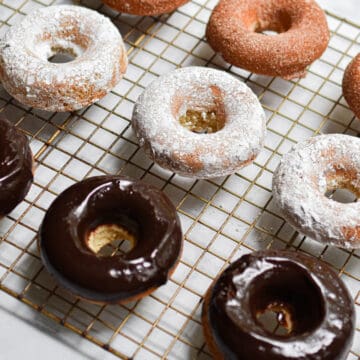